What will you do to make the world more beautiful?

For All of Us

Moving aHEAD with Love

Click on the head below and flip through the pages

under the head for a full screen view.

Over the years, the Gandhi Puppet and the GandhiMobile have become an inspiration to many, bringing attention to a wide variety of issues, often including the environment, global peace, and politics. In honor of civil rights leader and past Congressman, John Lewis, Jes often refers to his activism as making “good trouble”.
Jes has traveled throughout the United States with the Gandhi Puppet and the GandhiMobile, and on his own to Israel, Iran, and India, to promote peace and reconciliation. In 2014, Jes was honored with the Martin Luther King, Jr. Community Service Award from the Marin County Human Rights Commission for his work. 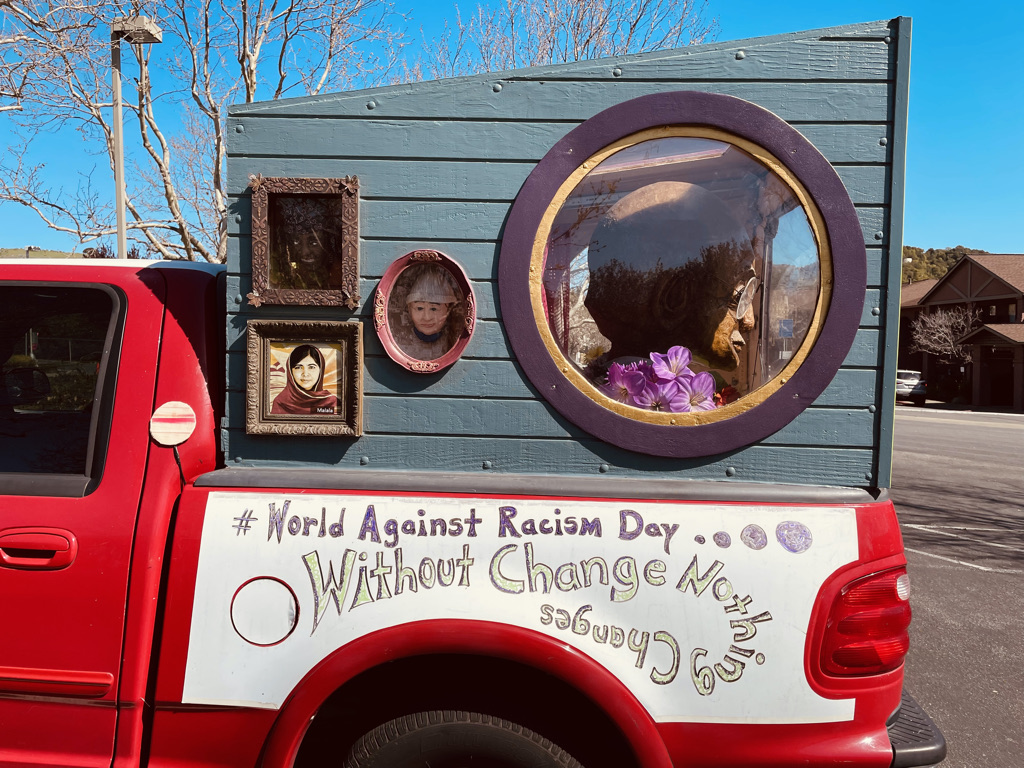 One of the features of the GandiMobile is its dry erase board and markers, where a passerby can leave their inspired message to the world regarding their hopes for the future. Jes will often pose a question or statement to stimulate responses.

Some of the inspirational messages that have appeared include:

“I have a dream that we can live in a world with no hate.”

“Treat others as you would have them treat you.”

“What will you do to make the world more beautiful?”

“This truck made my day.”

“Be the change you want to see in the world.”

“Love and accept everyone just the way they are. They are God’s children.”

“Peace begins with me. Keep your heart open to love.” 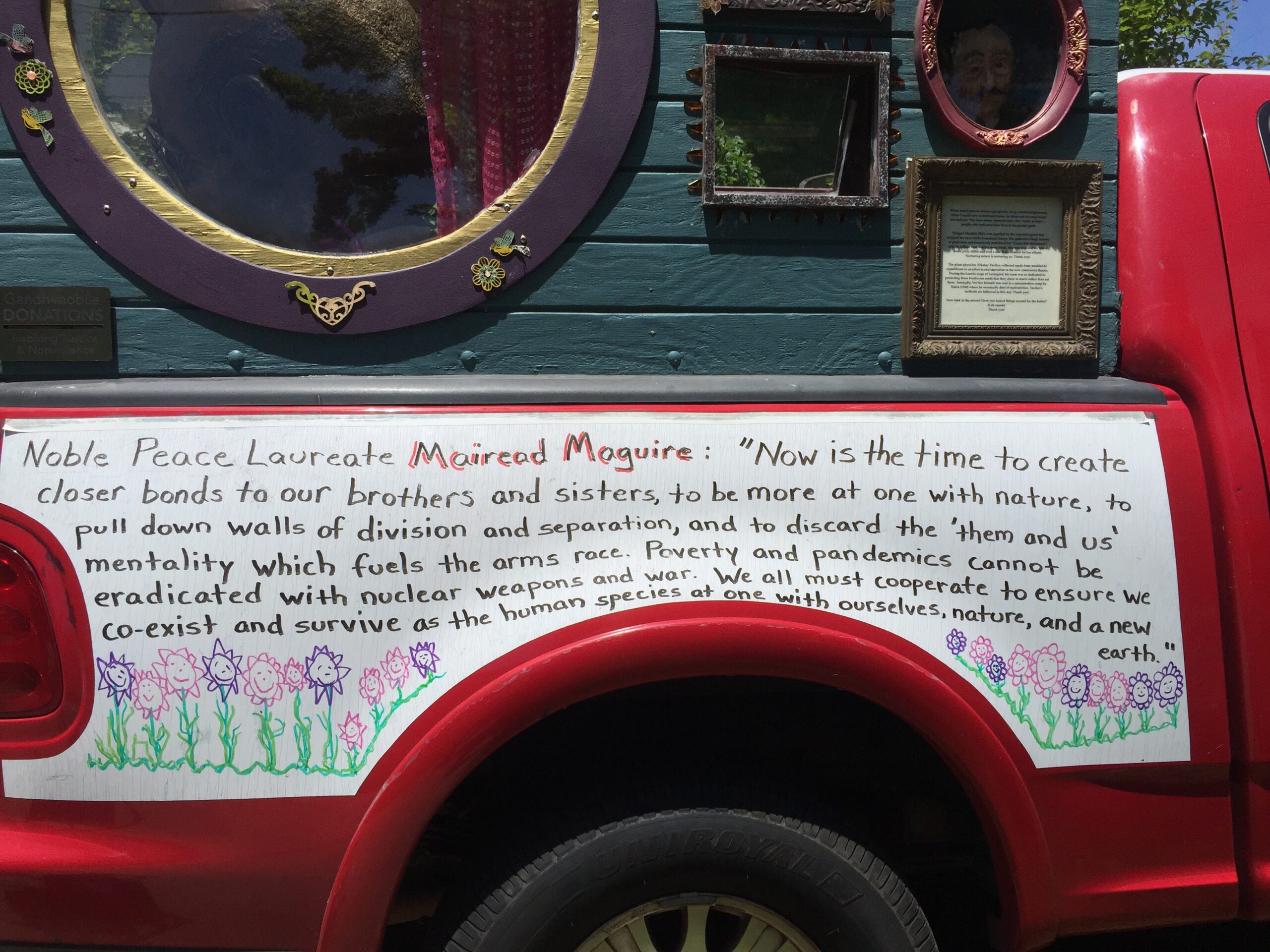 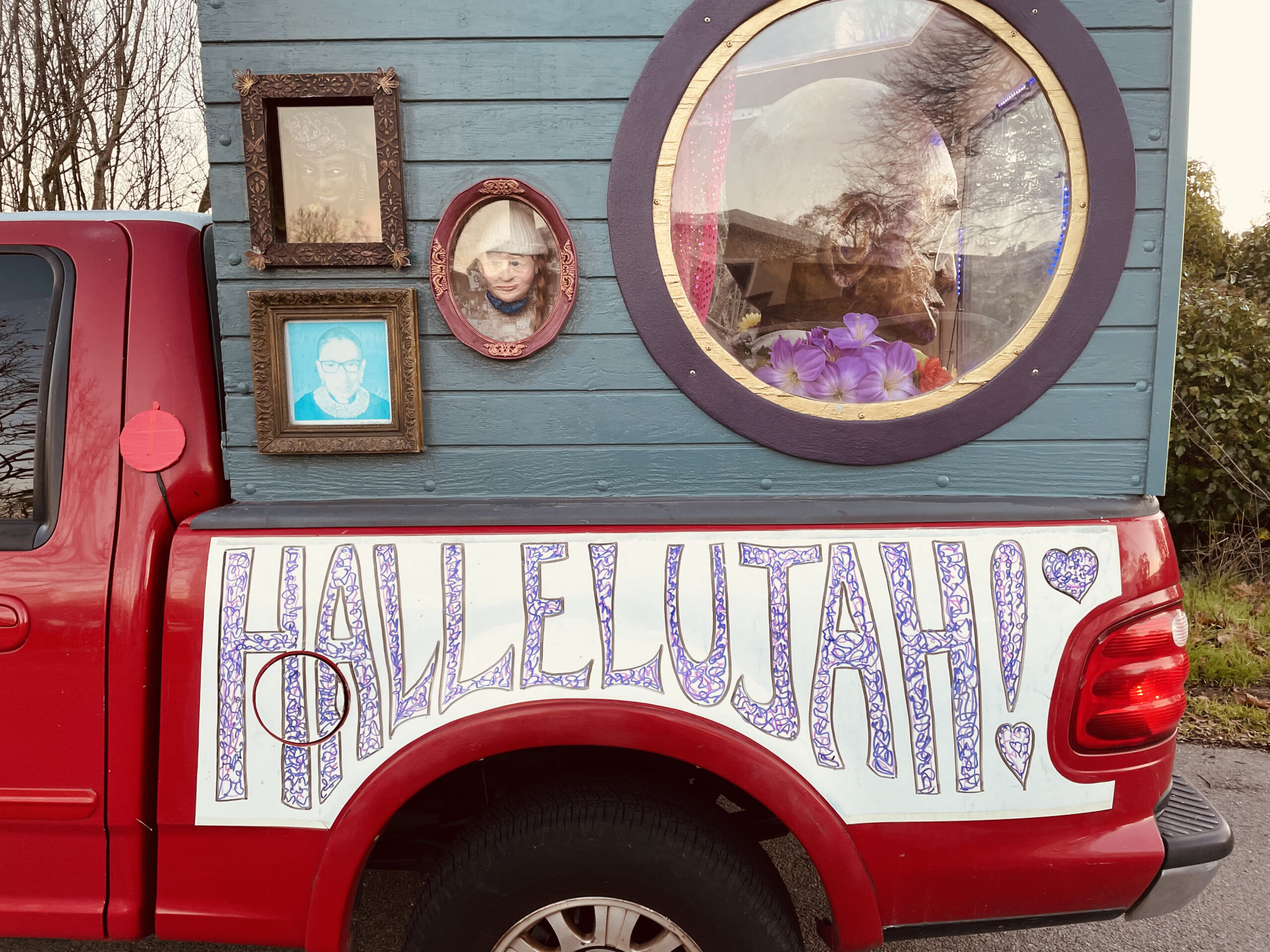 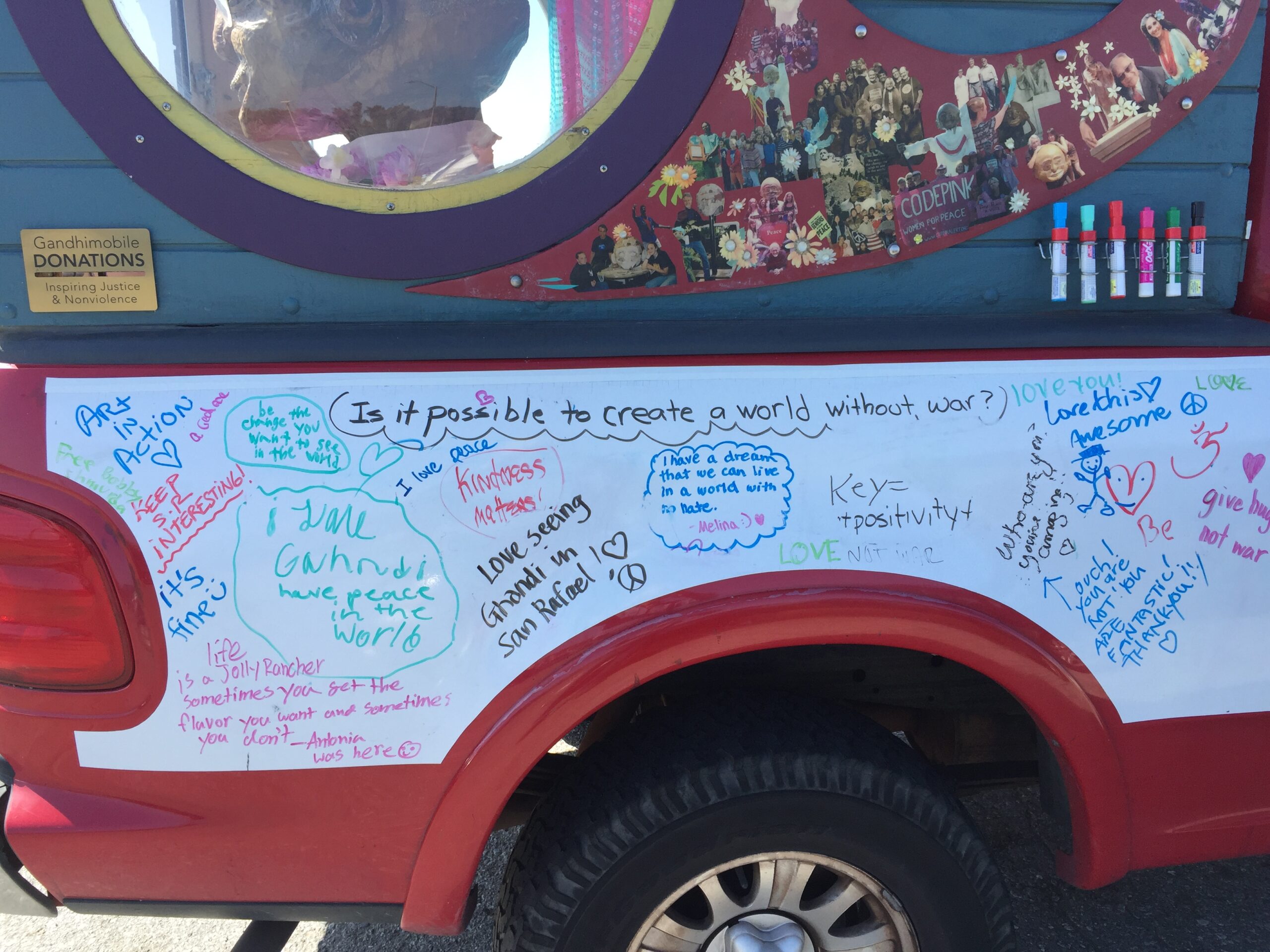 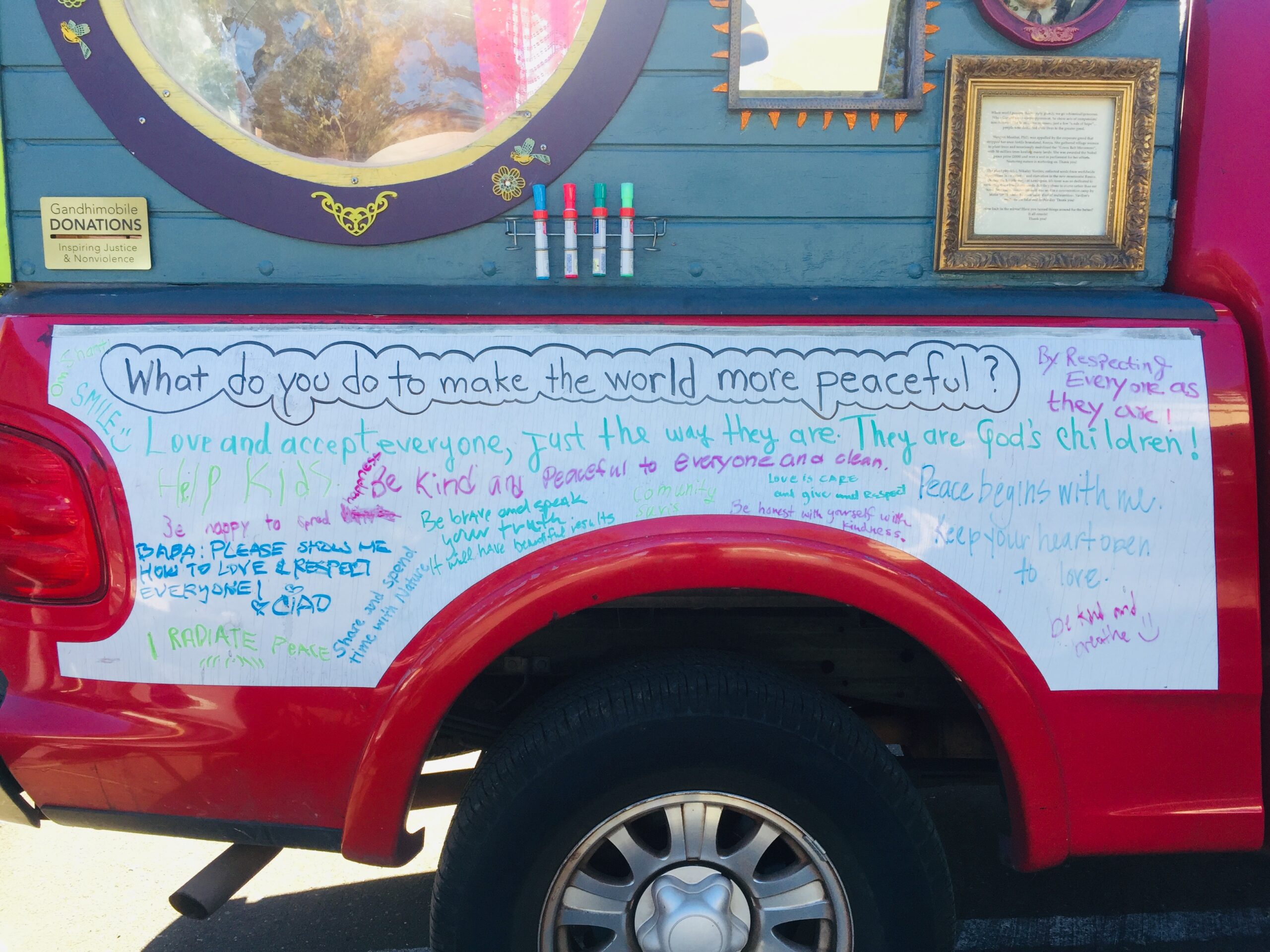 The GandhiMobile has become a vehicle for spreading love through education and awareness. And for touching those in its presence.

Jes shares that one of his greatest joys is to park the GandhiMobile in a public space and watch as parents explain to their children who Gandhi was, what he represented, and the impact he’s had on world peace.

For Jes, Gandhi represents the spirit of community that he feels is so dearly needed at this time. He feels that the world is at a momentous tipping point and each of us has an opportunity to choose between love and fear, and to make our world a better place. 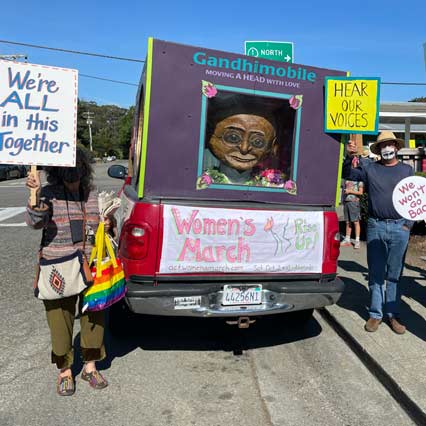 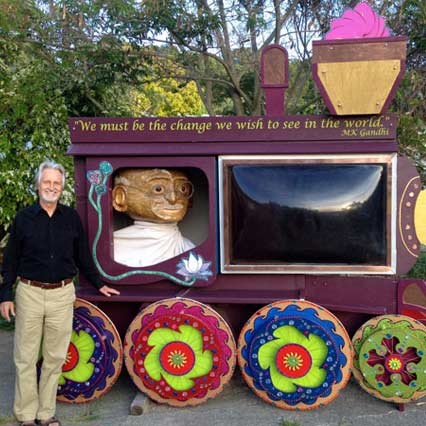 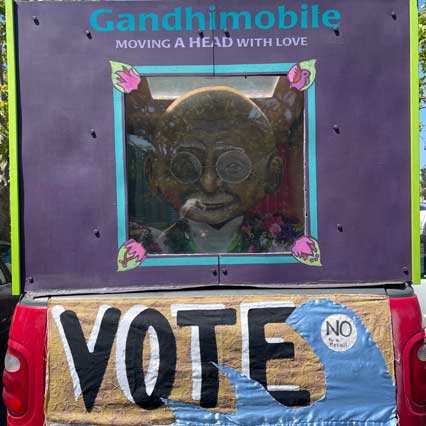 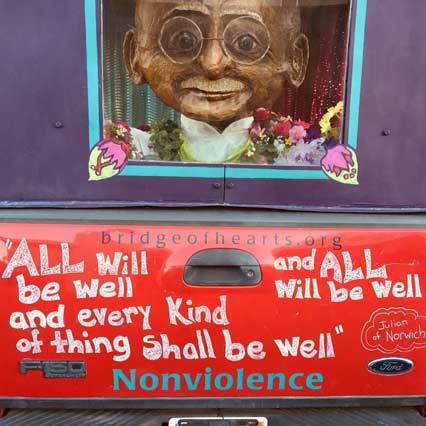 PHILDELPHIA (KGO) — A San Rafael man is on an unusual mission while at the Democratic National Convention.

Jes Richardson arrived in Philadelphia this week in a GandhiMobile to spread a message of peace. It took him five days to get there. He also made a giant Gandhi Puppet.

Anti-war rally in the shadow of Gandhi

Featured in the SF Gate

The Gandhi Peace Brigade from the Redwoods Retirement Community in Mill Valley assembles at the busy intersection of Camino Alto and Miller Avenue for a weekly protest against the Iraq war.

Towering over and inspiring the group is a nearly 10-foot papier-mâché puppet of Mahatma Gandhi that was constructed by Jes Richardson and students from San Marin High School in Novato.

Mohandas Gandhi traveled to many places advocating for peace, and now he’s making an appearance at the Democratic National Convention.

A 10-foot-tall Gandhi Puppet created by San Rafael peace activist Jes Richardson is at the convention in Philadelphia “to support the Bernie movement,” Richardson said.

Speaking from what he calls “the GandhiMobile” in Kansas on Thursday en route to the convention, Richardson said, “We are not trying to get (Sanders) nominated. We are showing support for his platform.”

…I wanted to inspire people to do something—to be able to say I did all I could to make a difference,” said Gandhi Peace Brigade founder Jes Richardson, as he held a 9-foot papier-maché puppet resembling Mahatma Gandhi. Speaking to the Washington Report on Middle East Affairs, Aug. 20 during the weekly “Seniors for Peace” anti-war demonstration in front of the Redwoods Retirement Community in Mill Valley, Richardson recounted his recent six-week cross-country motor trip to register people to vote and to speak about peace.

Mahatma Gandhi in the 21st century

“The world recognized Gandhi a long time ago and continues to find him. …We need to ensure the children of our world do not forget this power of peace and truth.”

This is what I said at the UN, now meet Jes Richardson, a man who best emulates the words….He is a teacher living in the Bay Area, California. He built the ten foot tall Gandhi Puppet in 2003, with the help of some high school students, to protest the occupation of Iraq and to show support for the Mill Valley Seniors for Peace and their weekly demonstrations.

The struggle for world peace got an unexpected boost Friday with the recovery of the missing Mahatma of Novato.

The Mohandas Gandhi figure — a 10-foot-tall puppet created by peace activist Jes Richardson — was reported stolen in Ignacio this week along with Richardson’s car. Richardson, known for exhibiting the giant Gandhi at parades and peace rallies, stored the puppet’s boulder-sized head in his back seat and its white garb in a rooftop carrier. 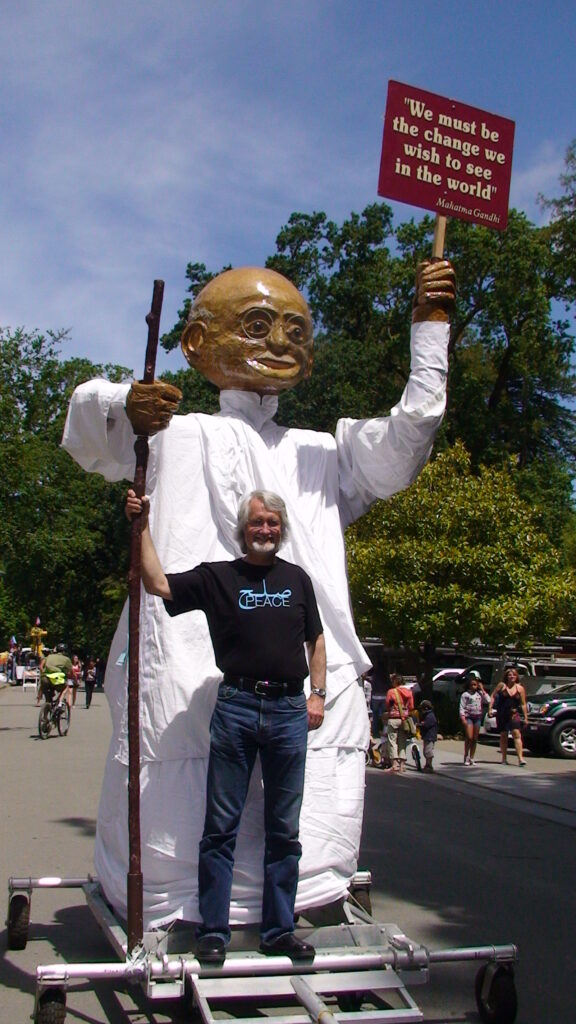 I have been a peace activist for most of my adult life. After graduation from Pennsylvania State University in 1970, I had to choose between being drafted and serving in Vietnam, going to prison, or a one way trip to either Europe or Canada. I chose Europe and began my journey in Amsterdam, and hitch hiked south through France and Spain, across the northern coast of Africa, up through Italy, and back to Amsterdam. I ran out of money and headed south to the warm beaches of Spain. “At least I won’t freeze to death”, I reasoned. I took the first boat to Ibiza and found a job teaching mathematics to the children of wealthy foreigners. At the end of the summer, I returned to the mainland with nothing more than a loaf of bread and a sleeping bag. A beautiful woman sunbathing on the ship’s deck caught my eye. Her name was Irma and she would later become my wife.

Irma and I spent the next few months getting to know each other in Morocco. We flew to the United States and hitch hiked cross country to San Francisco. We worked with Cesar Chavez and the Farm Workers. A Safeway in Delano had us arrested, along with thirty farm workers, and we spent the next few days in jail. I taught the men meditation and Irma taught the women yoga.

Always the environmental activist, I championed the cause of saving the Old Growth forest and was arrested twice for blocking logging trucks. At my hearing, I cradled my youngest child in one arm and held the hand of my other son as I explained my acts of civil disobedience. “I did it for my sons and for future generations,” I told the judge. He was lenient.

In 2003, I built a ten foot tall Gandhi Puppet, with the help of some high school students. We did this to support the Mill Valley Seniors for Peace and their demonstrations against the occupation of Iraq. In 2004, the Seniors for Peace financed a six week road tour of the Gandhi Puppet to encourage people to vote.

The Gandhi Puppet eventually became the GandhiMobile, with the theme, “Moving aHEAD with love.”

Keep up to date with The GandhiMobile and Jes Richardson and receive news and updates from Jes.

You must not lose faith in humanity. Humanity is an ocean; if a few drops of the ocean are dirty, the ocean does not become dirty.

In a gentle way, you can shake the world.

Your contribution makes our work possible and increases the number of people we’re able to reach. Please consider joining us in our mission to bring attention to a range of causes, including the environment, global peace and politics.